Most women should schedule an annual mammogram starting at age 40 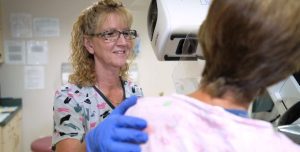 Early detection is important for diagnosing and treating breast cancer.

In the 1980s, doctors began recommending that women over 40 have a mammogram once a year. The outcome was significant: Breast cancer deaths fell by 35% due to annual mammography.

That’s why it remains important for women to schedule an annual screening mammogram starting at age 40. For women with a high risk of developing breast cancer, it may be appropriate to begin screening even younger or more often.

“Early detection is so important,” said Kelly McAllister, a breast care nurse practitioner in the Breast Care Center at St. Joseph Hospital in Nashua, New Hampshire. “If we find something in its earliest and often microscopic phases, before women find a lump or are symptomatic, the less invasive the treatment. It could mean only the surgical removal of an area, whereas if a cancer is more advanced, it could require a mastectomy, chemotherapy or reconstruction.”

St. Joseph Hospital follows the American College of Radiology recommendation that women of average risk begin annual mammogram screenings at 40. (Those who are higher risk may be advised to start sooner or to supplement their mammograms with breast MRIs or ultrasounds.)

McAllister recognizes that mammography guidelines can be confusing for women who read and hear different information from various sources.

Although breast cancer is more prevalent in older women, many women between the ages of 40 and 50 are diagnosed with the disease — a time when it can be more aggressive due to menstrual cycles. 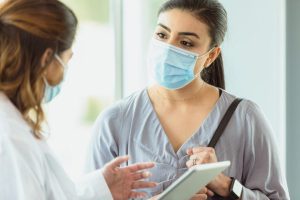 “Women over 40 benefit considerably from annual screenings,” McAllister said. “Without annual screenings, cancers can get larger and possibly to a later stage, which will require bigger surgeries and bigger treatments.”

Women who are at a elevated risk of developing breast cancer due to family history or other risk indicators may be advised to begin annual screenings even earlier.

At age 30, women — especially minority women and those of Ashkenazi Jewish descent — should schedule a risk assessment. Risk assessments look at a woman’s ethnic background, family descent, family history of breast cancer and other indicators to determine whether they are at average or high risk.

Other risk indicators include a higher breast tissue density, (which may make mammograms more difficult to read)  or having had a previous biopsy. St. Joseph Hospital also offers genetic testing to look for gene mutations.

Women in high-risk categories often will have more frequent mammograms or MRIs.

But for those at average risk — which is most women — having an annual mammogram is the best way to ensure a good outcome in case cancer is found.

“One of the biggest misunderstandings is that people assume because they have no family history of breast cancer, they don’t need an annual mammogram,” McAllister said. “But approximately 75% of women with breast cancer have absolutely no one in their family with breast cancer. This can give women a false sense of hope where they say, ‘Maybe I can wait until 50.’ But that’s not the case.”

It’s also important to let your doctor know of any changes in your breasts — a lump, pain or nipple discharge. Sharing that information with your doctor is critical when having a mammogram. That determines if a mammogram is a screening or diagnostic.

“If someone has a lump and doesn’t tell us, we’ll do a standard screening mammogram and may or may not see an area of concern if they don’t tell us,” she said. “It’s important to relay anything concerning to your doctor. That conversation is so important.”